With the 2019 Trade Secret Act (Geschäftsgeheimnisgesetz – known as GeschGehG) Germany implemented the Know-How Directive (EU) 2016/943). Here we summarize the requirements and important takeaways from the court rulings coming in now that the Act has been in force for almost 2 ½ years.

By adopting the Know-How Directive in a single Act, the German Legislature created a clearly arranged framework for trade secret matters. Sec. 1-5 of the Act define the requirements for a trade secret, permitted and prohibited acts. Sec. 6 -14 contain the legal claims for violation, Sec. 15-22 establish specific procedural requirements and finally Sec. 23 contains the penal provisions.

At least from the German perspective the new element is that a trade secret requires reasonable confidentiality measures, which the claimant has to prove in a proceeding. The act does not further specify reasonable protection measures, so those standards are currently developed by the courts. According to the Court of Appeal of Düsseldorf (15 U 6/20)

Whereby, the Court of Appeal of Hamm (4 U 177/19) made clear that minimal protective measures, in order to save costs or organizational efforts were not sufficient either. Specifically, the Court saw an obligation to “carefully follow up on any indication of circumvention of security measures and promptly adjust the security concept or take sanctions”. A ruling of the Düsseldorf Appeal Labour Court (12 SaGa 4/20), which considered “catch-all clauses”, was highly criticized. It required an employee to keep all information received during work as confidential which was too broad and therefore invalid. The criticism correctly points out that it is simply not practical to require a contract to contain a final list of potential trade secrets, rather a catch-all clause in connection with sample categories would be more suitable to provide necessary legal clarity. However, a catch-all clause may not be extended to limitless obligations for an employee and knowledge he or she has legitimately obtained, as this would significantly impact the former employees future job opportunities without any compensation.

The Austrian Supreme Court  (OGH, docket no. 4 Ob 188/20f) already had to deal with the further requirement of a trade secret namely that the information was not generally known or readily accessible. Accordingly, information that was part of expert knowledge was generally known and could therefore not qualify as a trade secret. Information on product specifications or manufacturing methods embodied in instructions, may nevertheless be "secret" if the skilled person can only develop them with considerable effort.

Also new is that Sec. 3 (1) no.2 GeschGehG specifically permits reengineering, unless this is (validly) contractually prohibited. Should a potential infringer argue in respect of a CAD design drawing protected as a trade secret that he or she has acquired the information by reengineering, he or she will have to demonstrate and prove how all elements of the drawing were obtained. It will not be sufficient to show merely that specific elements were measured (Court of Appeal of Düsseldorf 15 U 6/20). As the GeschGehG does not impact provisions regulating IP rights, therefore reengineering of software remains prohibited (Sec. 69e UrhG [German Copyright Act]), unless specific exceptions apply. Source Code is not only protected by copyright, but regularly enjoys also protection as trade secret. The Austrian Supreme Court of Justice held in a case where a software developer threatened to publish source code despite contractual obligations granting non-exclusive rights (also regarding the source code) to a third party, which would constitute a trade secret infringement. The Court made clear that several persons could own a trade secret, should they have the actual possibility (e.g. based on a contract) to determine, limit or exclude access to the trade secret (docket no 4 Ob 182/20y).

Sec. 4 GeschGehG defines the prohibited acts (as unauthorized access, disclosure or use of a trade secret). Noteworthy is Sec. 4 (3) GeschGehG, which addresses trade secrets obtained from a third party. A person can be directly liable for a trade secret infringement, if they knew or should have known at the time of obtaining, using or disclosing the trade secret that the other person who provided the trade secret had done so without authorization.

The legal claims for violation of the trade secret (sec. 13 GeschGehG) are shown below. 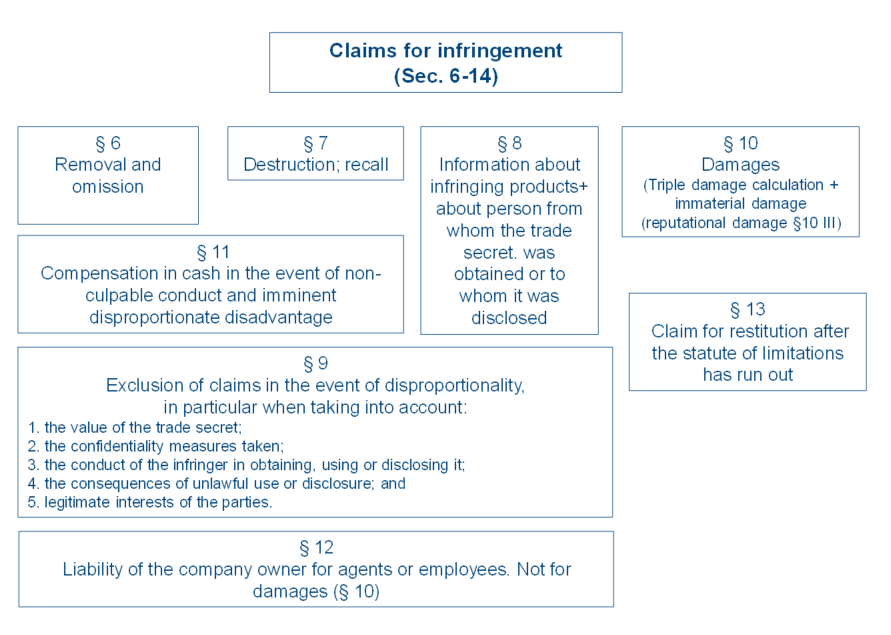 Another novelty for German law is Sec. 16 GeschGehG, allowing the court to grant comprehensive protective orders reducing the risk that trade secrets become public during the course of the proceeding. The court can also limit access to information (e.g. allow only access to redacted documents) and even limit the number of participants in a hearing and exclude the public (sec. 19 GeschGehG).

However, these protective orders require that claims based on the GeschGehG are asserted. It is not sufficient that trade secrets are merely affected. With the introduction of Sec. 145a PatG (German Patent Act) on August 18, 2021, Sec. 16-20 becomes applicable also in patent proceedings.

Trade secret infringements continue to constitute criminal acts under German law, even if not specifically required by the Know-How Directive. The penal provisions mirror with minor exceptions the unauthorized acts defined in Sec. 4 GeschGehG. The criminal provisions provide in general for penalties up to two years imprisonment or financial fines. This can go up to five years imprisonment, where the infringer was acting commercially, knew that the trade secret was to be used abroad, or used the trade secret abroad.

Overall, the Know-How Directive creating harmonised standards across the European Union and the German implementation with the GeschGehG provide helpful tools that should make enforcing trade secrets easier. However, this requires companies to do their homework. They must be able to show that they have implemented reasonable confidentiality measures in order to be able to enforce these claims. The potential liability for trade secret infringement knowledge obtained (unknowingly) from third parties, e.g. business partners or new employees is also something companies need to be aware of and respond appropriately to mitigate such risks as much as possible. 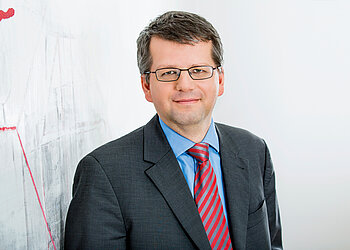 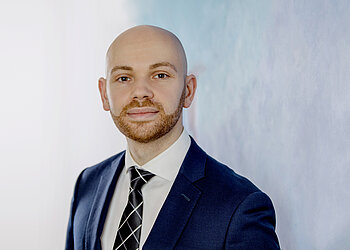